What are the 4 Costas of Andalucia in Spain and Where are they? 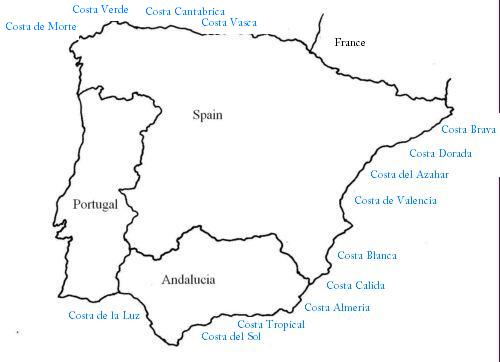 Thanks to Rachel Webb https://www.andaluciaexplorer.com

How many ‘Costas’ are there in Andalucia? There are 4. These make up the 800 Km plus of the coastline of the region of Andalucia in Southern Spain.

The Spanish word ‘Costa’ simply means ‘Coast’. So, we have;

The Costa de la Luz is a section of the Andalusian coast in Spain facing the Atlantic; it extends from Tarifa in the south, along the coasts of the Province of Cádiz and the Province of Huelva, to the mouth of the Guadiana River. Wikipedia

Costa Tropical is a comarca in southern Spain, corresponding to the Mediterranean coastline of the province of Granada, Andalusia. It is also but less frequently called the Costa de Granada or Costa Granadina. Wikipedia

There are more Costas along the South-Southe/East coast of Spain. Some are more well known than others, such as;

To the North of Spain, you have more Costas

The Costa del Sol is by far the most famous of the Spanish coastal areas Tourist flock there in their millions each year. Some of the towns and cities along the Costa del Sol have become legendary names in Spanish tourism as far as the British and European tourists are concerned.

Everyone has heard of places such as Nerja, Malaga, Fuengirola, Torremolinos, Marbella, Benalmadena, that’s just naming a few.

When it comes to winter vacations to Spain, the Costa del Sol runs out a big winner. Due to the number of days of sunshine and warm temperatures, hotels,  apartments, villas and other accommodation do very well.

Golfers make up a high percentage of tourists. With more than 50 golf courses, the ‘Costa del Golf’ is the Mecca of Golf enthusiasts. They can play golf 24/7.