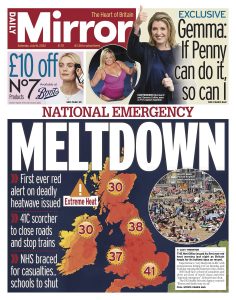 Terral: what is it?

Wind! Very hot wind. That is the best and only way to describe ‘La Terral’ as we call it in the Malaga province of Andalucia, Spain.

If you have a good head of hair like me, you will have used the hair dryer at some stage. Well, imagine standing in front of a massive dryer, you get the picture?

Many people think that this horrible phenomenon comes from the Sahara Desert via the North African coast; it doesn’t.

Where does Terral Wind come from?

Cold wind from the north of Spain travels south and through the mountains around the Malaga area. A rapid increase in atmospheric pressure combined with a loss of moisture and increase in temperature gives you this hot, dry blustery wind.

It doesn’t end there: once this Terral Wind reaches the coast, it displaces the surface moister. This in turn makes the colder, deeper water rise to the surface. Viola! you have very cold seawater.

That is why, during these how and windy days, the sea is rather cold.

There is a great website with more information on the Terral Wind and other subjects of interest. Malaga Web, go check it out.

Terral Wind in the UK is called Helm Wind. The Helm Wind is a named wind in Cumbria, England, a strong north-easterly wind which blows down the southwest slope of the Cross Fell escarpment. It is the only named wind in the British Isles, although many other mountain regions in Britain exhibit the same phenomenon when the weather conditions are favourable. Wikipedia

It comes to something when some parts of the UK are even hotter than Spain. Temperatures are getting to 40ºC in some parts of England. This is causing some concern at the UK weather centre. So much so; that they are issuing severe weather warnings.

It does make the older generation laugh. Take a peep at this Wikipedia snippet: The 1976 British Isles heat wave led to the second hottest summer average temperature in the UK since records began.

At the same time, the country suffered a severe drought. It was one of the driest, sunniest and warmest summers in the 20th century, although the summer of 1995 is now regarded as the driest. Wikipedia

How ever did we cope?

If you had the same scaremongering media back then, none of us would have left the house.

The Daily Mirror leads with a story of passengers ‘passing out’ in ‘boiling terminals’ after long flight delays.

The Washington Post really goes for it, with; National emergency in Britain as ‘deadly’ heatwave hits Europe.

The Sun is edging its bets with: Scorching heatwave to last at least eight more days befor ending with a bang! as thunderstorms set to hit the UK.

The Daily Star: With record-breaking temperatures forecast for much of the UK over the next few days, Kit Malthouse is chairing an emergency Cobra meeting at No 10 Downing Street. It goes on to tell us that there will be ‘temperatures never experienced’

How to survive the terribley hot UK weather

The trick is to get plenty of liquids down you. There is more advice available from the UK Government.

Walk in the shade, apply sunscreen and wear a wide-brimmed hat, if you have to go out in the heat. avoid physical exertion in the hottest parts of the day. make sure you take water with you if you are travelling. take care and make sure to follow local safety advice if you are going into the water to cool down. Check the UK Gov website for more sage advice on how to survive in the very hot weather.

How to survive the torrential rain and storms that are due to follow the very hot UK weather.